For archaeologists, the evidence of the past is mostly found below-ground, but there's an awful lot of history in the structures we see everyday and the landscape they occupy. Bringing us today's above-ground history lesson about how Dolley Madison rescued many of the White House's historical treasures from invading British troops is architectural historian Rebecca Crew. She's got the lowdown on the Bank of Maryland and its role in the War of 1812. Read on!

Perhaps one of the most well-known tales from the War of 1812 is the account of Dolley Madison saving the portrait of George Washington before the White House was torched by the British.  This legend has long-established Mrs. Madison as one of the most popular First Ladies, and one of my personal favorites.  To celebrate the bicentennial of this event, which actually occurred on August 24, 1814, I thought I would attempt to determine where George Washington’s portrait was stashed for safe-keeping, and whether the structure might still exist.

As soon as she heard that British troops were on their way to burn Washington D.C. in general and the White House in particular, Dolley Madison was ready for action. As she once wrote in a letter to her cousin,“I have always been an advocate for fighting when assailed." (editor's note: You guys, do not mess with Dolley Madison).

With the help of her husband’s teenage slave Paul Jennings, the French-born doorman Jean Pierre Sioussat (also known as John Susé or French John), and the White House gardener Mr. Thomas Magraw (or McGraw), Mrs. Madison loaded up a wagon filled with cabinet documents.  She knew Gilbert Stuart’s portrait of Washington, one of the four Landsdowne portraits, would be too appealing a target for the British troops to use to mock the young United States.

The large portrait was in the state dining room. While some accounts suggest Mrs. Madison ordered it cut from its frame,  in fact, she had it unscrewed from the wall. The frame was broken, and the portrait was nestled carefully in the cart.

Meanwhile, two gentlemen from New York arrived at the White House to offer their assistance to Mrs. Madison. They were Jacob Barker, a financier, and Robert G. L. De Peyster, a merchant.  Barker and De Peyster stayed at the White House after Mrs. Madison left, first for the safety of Dumbarton House (then owned by Charles Carroll who fetched Dolley in his carriage) and then to Virginia.  Barker and De Peyster collected more items, and visited with President Madison later that day. Barker and De Peyster followed the Army out of Washington, traveling along F Street, NW. They spent the night at the private home of a Maryland farmer, and deposited Washington’s portrait in a local farmer’s barn for the night.

In 1792, Folie’s map of Baltimore shows the Bank of Maryland standing at the approximate location of today’s 26 South Street, on the west side of the street, south of Lovely Lane (now Redwood Street). 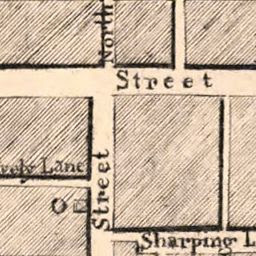 However, Lucas’ 1822 map of Baltimore showed the Bank of Maryland on the east side of South Street, and written descriptions state that it “stood in South Street between Walnut Street and Lovely Lane.” Regardless of which side of the street the Bank of Maryland stood in 1814, the Bank of Maryland institution collapsed in 1834, and its possible locations on the east and west sides of South Street have been replaced by early twentieth-century bank and office buildings. 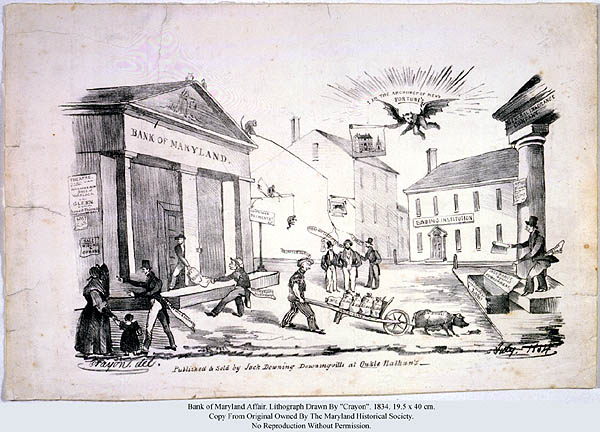 While it is not possible to visit the vault where Presidential papers were kept during the summer of 1814, the story offers a valuable teachable moment on the role of the federal government.  Why did Mrs. Madison choose to send items to the Bank of Maryland?  Location played a part, as Baltimore was relatively close to Washington, and Virginia’s cities were not as established as banking centers.  Also, in 1814, there was no federal bank. The Bank of the United States, which was established in 1791, was opposed by James Madison as unconstitutional; Madison and others, such as Thomas Jefferson, did not think the federal government needed to be involved in banking and that this could be left to the states.

When the Bank of the United States’ charter expired in 1811, Congress did not renew it. The Bank of Maryland, established in 1784 and opened in 1791, was one of the oldest banks in the country and retained the right to issue bank notes. I have not found any images of the Bank of Maryland other than the cartoon shown above, but perhaps it resembled another early state bank, the Bank of Pennsylvania, which Benjamin Latrobe designed ca. 1790? 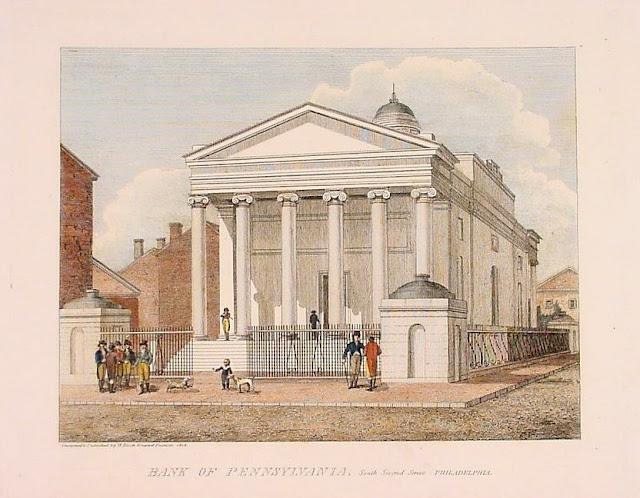 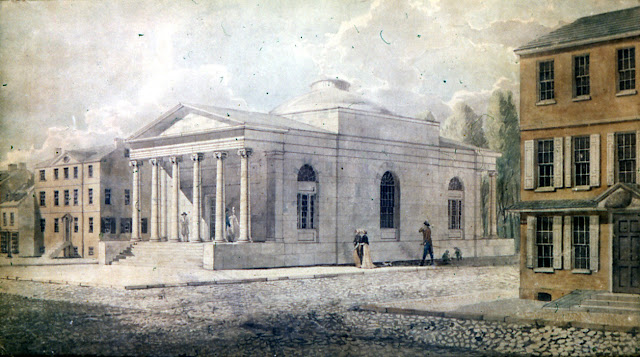 Eshelman, Ralph. A Travel Guide to the War of 1812 in the Chesapeake: Eighteen Tours in Maryland, Virginia, and the District of Columbia. Baltimore: JHU Press, 2011. Available online at www.books.google.com.
Scharf, John Thomas. The Chronicles of Baltimore: Being a Complete History of "Baltimore town" and Baltimore City from the Earliest Period to the Present Time. Baltimore: The Turnbull Brothers, 1874.  Available online at www.books.google.com.

Posted by SHA Cultural Resources at 7:04 AM

Celebrate the Bicentennial at these Upcoming Events!

SHA Cultural Resources
Baltimore, MD, United States
As part of the state’s bicentennial commemoration, the Maryland State Highway Administration’s archaeologists have partnered with state, county, and federal agencies to locate, survey, and excavate War of 1812 battlefields, encampments, and even a shipwreck. Since our work will continue into 2014, we thought it was important to establish a web presence where the public and our partners can follow along as we learn new things about these sites. In addition to hearing about our local discoveries, archaeologists, architectural historians, and other professionals working on War of 1812-related sites anywhere in the country are invited to contribute. We hope you’ll stop by often to read about our efforts to uncover new and fascinating stories about an obscure, yet significant time in our nation’s history. Our editor is Dr. Lisa Kraus.